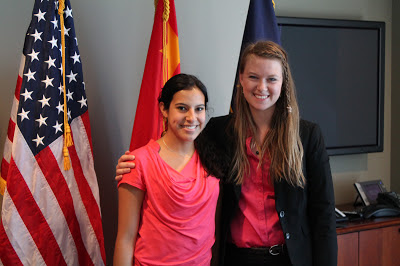 First, allow me to introduce myself. My name is Maggie Dankert and I’m an intern for the Asian Learning Center at The International Center. After graduating from the University of South Carolina with a degree in East Asian Anthropology, I headed to South Korea to teach English for two years. It was there that I fine-tuned my aspirations within the large umbrella of Globalization. My interests lie in working with international students on a university campus, and working in the Asian Language Center will let me pursue my passion. We have begun exciting work that involves partnering international universities with local colleges to increase student exchange and cultural awareness.
I have not completed my first month of my internship at The International Center, but already I feel like I have learned so many great things. The staff’s fluid cooperation between departments is mirrored in this internship, allowing me to experience several different aspects of working with International peoples.
This past week, working through both the Strategic Initiatives Department and Protocol Office, The International Center assisted the City of Indianapolis in welcoming the new Consul General of China on his first visit to Indiana. On his final day in Indianapolis, and as I reflect on the whirlwind of events he attended, I feel a sense of pride in the community of Indianapolis, The International Center, and the organizations we partnered with. Receiving the Consul General at such places as the Children’s Museum, the Indy Speedway, the International Airport, the Statehouse, The Columbia Club, and the Bankers Life Fieldhouse highlighted many great aspects of our city. My universities studies were brought to life as I attended meetings and saw how international business and diplomacy were conducted between the Chinese delegation and their American counterparts. These connections will build bridges and networks that will bring future international investments to Indiana.
During the Consul General’s visit, I assisted our Protocol Officer in various duties. Initially I was unsure of what a Protocol Officer does, but after spending the week with him, I now consider him a expert on Feng Shui—not for furniture but for people. He arranged the entire agenda in such a manner that an optimal harmonious atmosphere was produced and the best possible connections were made.
I want to share some of the lessons I learned during these three days.
As you can see, these two weeks have been action-packed. The knowledge I’ve picked up in just a short time span has been enlightening and rewarding. I am looking forward to the next two months!